Herbulot (1909 – 1997) is a legend for the Sailing World of France and beyond. As a top-racing skipper, he represented his country four times in the Olympic Games, from 1932 (at the age of 23) to 1956. Although a graduate architect from the School of Fine Arts in Paris (Beaux Arts), he was devoted to his lifetime passion, Sailing.

As a young skipper, he made his own sails with such a talent that he soon became sought after! In 1941 he designed his first 4.5m long sailboat. Since then he didn’t stop. He created nearly 100 designs, including some well-known bestsellers.

However, there would be something more important than his amazing productivity that would seal his times and that would be the revolution he brought, realizing his vision to make Sailing accessible to all. He specialized in the use of plywood as a construction material, utilizing its excellent features, its superior mechanical characteristics and its very low price.

The legendary Vaurien of 1951 inaugurated a time of sailing madness in France. Designed as free of any need of a skeletal frame, based on the dimensions of the larger sheets of plywood available in the market, this 4.08m small sailboat became a synonym of pleasure sailing in France. The following year, Herbulot designed the famous Caravelle, a sailboat, which had naturally evolved into the most popular yacht used by Sailing Schools, for decades. Shortly after he presented the famous Corsaire of 5,50m, which was also called “2CV of the Sea”, at that time.

Herbulot was so skilful he even designed a unique diagonal cut spinnaker that was accepted as being superior to the conventional spinnaker of the day and was adopted by nearly all top racing sailors worldwide, for many years. Famously, in the 1958 America’s Cup, the British entry, Sceptre, racing against America’s far superior boat, Columbia, was able to pull ahead once she hoisted her Herbulot’s spinnaker, although she did not eventually win the race. To cut and sew this enormous spinnaker, he requisited the municipal Dance Hall in Paris, as well as a team of assistants coming from the Parisian fashion ateliers!

One of those is Darinka II.

Just like all Herbulot’s offspring, she embodies the spirit and mind of her charismatic designer. She talks the language of the sea and the wind, ensuring absolute reliability and precision in her navigation. 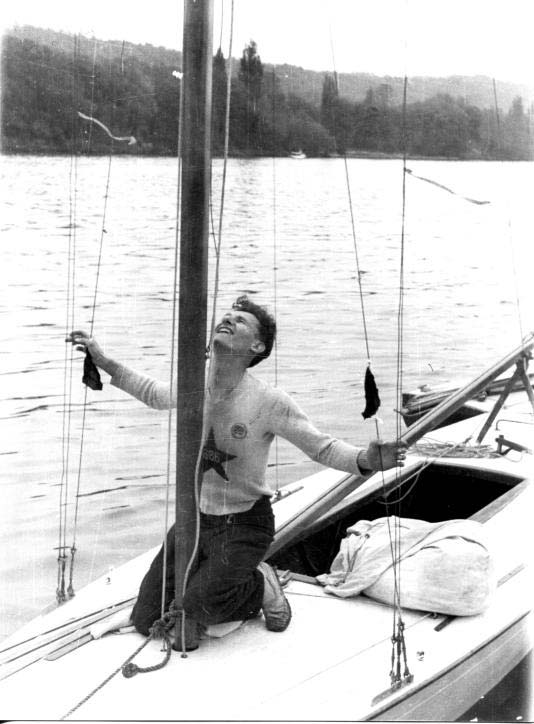