The island of Corfu is at the north-westernmost end of Greece, right where the Ionian meets the Adriatic Sea. The island is one of the most famous and most visited travel destinations.

Its hazel-green waters, protected coves covered in vegetation, picturesque harbours, impressive precipices that end to the sea and golden beaches make Corfu an ideal destination for sea-lovers. At the same time, the island’s history, unique architecture, customs, local cuisine and culture make Corfu one of the most beautiful travel destinations any time of year.

The island of Corfu reveals countless faces to the visitor: Mediterranean villages and Venetian manor houses, English gardens and French arched galleries, endless olive groves and wetlands, Tuscany-like landscapes and wavy dunes that remind us of the African desert, shallow sandy beaches and breathtaking cliffs, vines and kumquats, a cosmopolitan and authentic character; last, but not least a town like a jewel that will enchant you forever.

The town of Corfu, a listed UNESCO World Heritage Site, is a fascinating cocktail of different elements originating in the years of the island’s Venetian, French, Russian and English occupation that have been charmingly been assimilated by the local culture.

The Old and the New Fortress, Spaniada square, Liston, the Palace of St. Michael and St. George, the dozen churches, the labyrinthine cobbled alleys with the lines of hanging clothes, arches, Philharmonic orchestras, little shops, restaurants and busy cafés all create a setting one-of-its-kind.

A tour around the numerous sights of the town must include the nearby Palaiopolis and Mon Repos, including Corfu’s trademark, the Pontikonissi.

The entire historical centre of Corfu is a living stage set dominated by the beauty, the history and the eccentric temperament of the locals.

There are many and much satisfying sights and monuments. Here is a summary of the most important ones:

Old Fortress: a masterpiece of Venetian fortress architecture, it is one of the most recognisable traits of Corfu island. Constructed on a peninsula with two hills, the fortress is connected with the centre of the town by a bridge.

New Fortress: another masterpiece of Venetian fortress architecture, which is also the town’s western limit. The fortress dominates over the town’s old port.

Spianada Square: considered by many the largest square in the Balkans, Spaniada was built to the standards of Europe’s royal gardens. Situated across the Old Fortress, the square is surrounded by elegant manor houses and impressive buildings, such as the Palace of St. Michael and St. George and Liston’s arched stone colonnade.

Liston: the town’s most renowned cobbled street next to Spaniada Square. It was constructed during the island’s French occupation (1807-1814). Its arched colonnade hosts many restaurants and cafés.

Saint Spyridon Church: the town’s most famous religious monument, situated behind Liston. Let alone being the island’s protector saint, the Corfiots consider that St. Spyridon is a familiar presence in their everyday lives.

The Palace of St. Michael and St. George: a majestic Regency-style palace at the north end of Spaniada square, it was constructed in the years of the island’s British occupation. The palace today houses the Municipal Gallery and the Museum of Asian Art, which is the only museum in Greece dedicated to art and antiquities from the Far East and India.

Just outside the town

At the town’s southeast, guests will find Palaiopolis, Corfu’s ancient city. The area includes the famous Mon Repos estate, a verdant sea-side botanical garden sea extending over 25.8 hectares. Inside, we will find the neoclassical palace with the same name, which today houses the Museum of Palaiopolis and archaeological treasures, such as the ruins of two ancient Temples.

A bit more the south, in the clear blue waters in front of “Ioannis Capodistrias” International Airport, guests will come across Corfu’s trademark and most photographed sight, the Pontikonissi. It is a verdant rock protected as a natural monument. Right across, the white monastery of Panaya Vlachernon is there to complete the famous tableau of the area. 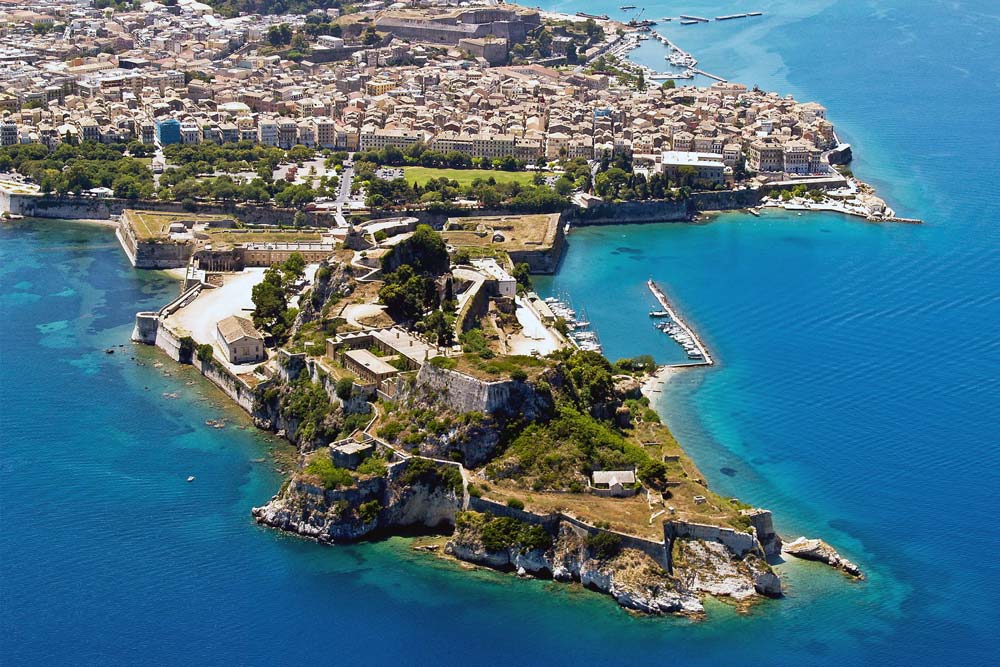